Attempting to remove an unresponsive badger from a dark road, a police patrol soon realizes that the animal is not dead but rather dead drunk. Things take an even stranger turn when the creature wakes up.

“It’s like Charles Bukowski and Steve McQueen teamed up with a badger to make a stop motion film about the tragic glaze, craze and daze of alcohol abuse.”
Chris Robinson, artistic director of the Ottawa International Animation Festival

“Drunkenness can be at once comic and tragic, and both moods are encompassed in this freaky, freewheeling animated short. Spela Cadez’s Nighthawk is, in the simplest terms, a cautionary tale about the misery of alcoholism. But the boozer in question is a badger, his poison a bunch of rotten pears, his night on the town more of a road trip into nightmarish abstraction.”
Alex Dudok de Wit

Cut-out animation brings to life a story that is both disturbing and weird, and perfectly captures the experience of drunk driving. A badger lies motionless on a local road. A police patrol approaches the body in the dark. They soon realize that the animal is not dead; the badger is dead drunk! When the police attempt to drag the creature off the road, he wakes up and things take a strange turn…http://www.awn.com/animationworld/narrative-shorts-we-watched-and-loved-oiaf-2016

Four Great Shorts from the Ottawa International Animation Festival, By Amid Amidi

A surreal story that is perfectly matched with a surreal cut-out style that transfers uncomfortably familiar human characteristics onto a badger.

“Honorary mention in the International Competition (Short Film) was given to Špela Čadež and her hallucinatory Night Hawk, for its fresh and visually imaginative take on a true story about a drunk badger.”

Regarding Špela Čadež’s Nighthawk it is though possible to state that the Slovenian artist was driven by the need to create a work that would be completely different from her previous films and so we are confronted with dark, non-judgemental and utterly sad story of addiction and humiliation. Nothing much happens in Nighthawk, yet after 8 minutes projection the emotions are risen high.

A badger intoxicated with pears drives madly into the night, argues with an imaginary passenger, almost dies on the road and has to be moved away by policemen’s shovel. Čadež openly referred to Yuri Norstein’s cut-out (another counterpoint to her previous films made in puppet technique) and realized the film on the old multiplane table.

Misty unreal settings evoke tale of self-destruction and contempt where in the end the viewer finds compassion instead of redemption. The aesthetics is based on graduation of d arkness, the badger with a repulsive red nose remains the central figure and his positioning mostly dictates the editing. Dialogues are either drunk’s gibberish or trivial conversations of random passers by. Simplicity is an effect of complex and challenging filmmaking and only this impressive reduction is able to bare and transmit painful and manifold drama.

Zippy Frames, a solid European resource that covers animation festivals and films, surveyed an esteemed group of 28 industry professionals, including festival programmers, academics, and filmmakers (among them Tomm Moore, Konstantin Bronzit, and Sarah Saidan), about their favorite animated shorts of 2016.

28 animation professionals,  from Tomm Moore (Secret of Kells) to Konstantin Bronzit (Lavatory- Lovestory) to up-and-coming animation directors loke Sarah Saidan (Beach Flags), festival programmers and academics, were all invited to give their view.

Igor Prassel (Animateka):  a masterful antropomorphic depiction of alcoholism through the use of multiplane cut-out animation.

The best indie animation of 2016

If Charles Bukowski scripted Bullit with a badger, the result might look something like Nighthawk, a blistering, squirming tragedy trailing an alcoholic whizzing blurrily through bending roads in the black of night. If you’re thinking about ditching booze, watching this blunt depiction of an alcohol abuser might hasten the process. 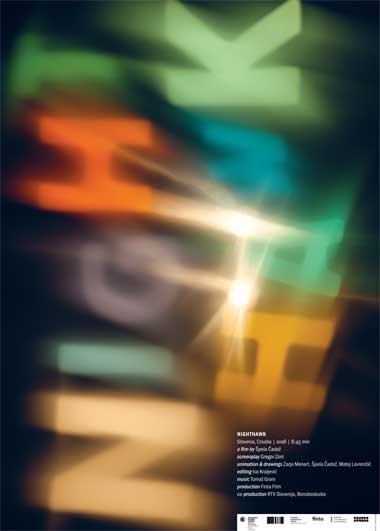 Description of animation technique
The aesthetic in Nighthawk was created with the use of a multiplane camera set up, achieving motion in animation with the help of oil-painted cell and paper cut-outs. Following the footsteps of the Russian master Yuriy Norshteyn, Čadež already used the multiplane technique on her previous film, Nighthawk and developed its use further in Steakhouse. Čadež is inclined to combining traditional and experimental techniques to solve creative challenges in the film and search for the inherent visual representation of the storyline and its characters.

Orange is the New Black, Uraveled